There is no question that Koenigsegg builds their cars to set new standards for speed and power. These supercars undergo years of research, testing, and refinement. From the hard work comes vehicles that drive faster and handle better than any others on the road. Koenigsegg has maintained its determination to achieve perfection since day one. For them, nothing less than the best is acceptable. The result, a proud history of record-setting Koenigsegg cars.

When looking at the history of Koenigsegg, it is unlike any other automaker. Since the automaker’s inception in the mid 1990’s their cars have stood out even among the toughest competition. With each model, engineers take another step towards improving these driving masterpieces. As a result, when you drive a Koenigsegg, you know it is the finest production car available in the world. This is more than a claim, it is supported by a tradition of world records. Continue reading to learn more about Koenigsegg’s historic record-setting models.

As soon as Koenigsegg introduced its first production car, the automaker entered the record books. The Koenigsegg CC8S boasted the most powerful production engine ever at the time of its release in 2002 (665 hp). For this, the CC8S earned Koenigsegg’s first Guinness World Record. However, the CC8S’ follow-up, the CCR, took Koenigsegg to even greater heights.

Billed as an evolution to the CC8S, the CCR took the new title of most powerful Koenigsegg vehicle. When it began production in 2004, the CCR’s performance specifications astonished the automotive industry. It could produce over 800 horsepower, far surpassing the output of even the CC8s. Upgrades for the CCR included a front splitter, larger brakes, tires, and twin compressors in the engine.

The CCR did more than just impress on paper. It also proved its prowess on the track. Most significant was setting a new world record for fastest production car. In 2005, the CCR reached a speed of 388 km/h. This speed beat an 8-year-old record set by the McLaren F1. Furthermore, the CCR set records at other notable tracks, such as the Nürburgring’s slalom record.

Moving on to the third generation of its production cars, the CCX continued to generate buzz. Engineers utilized the latest technology for its 2006 release. Koenigsegg used almost entirely new components in the CCX, making it the brand’s first fully digitized car. They also utilized improved aerodynamics to make the vehicle more efficient. Larger than the CCR, the CCX matched its predecessor’s 806-horsepower engine. For many, the CCX was the first time Koenigsegg truly achieved its goal of creating the world’s best production car.

Right away, the CCX got to work setting new records. Before its release, it already set the lap record at the Top Gear Track. On the popular BBC program, the CCX shocked viewers when it completed a lap in 1:17.60 in Dunsfold, England. It also set a speed record for the track a year later reaching 315 km/h. That same year, it also set a speed record at the Nürburgring hitting 313 km/h at the famous German track.

Following the resounding success of the CCX was no small feat for Koenigsegg. In 2011, engineers rose to the occasion, producing the Agera. To that point, the Agera stood out as the most popular and capable Koenigsegg. The engine saw another notable increase with a maximum 960 horsepower output. The Agera accelerated to 100 km/h in three seconds flat and produced over 1,000 Nm of torque. The exterior continued to see improvements and weight was minimized.

In testing, the Agera reached a top speed of 420 km/h. On the track, it dominated the competition with its jaw-dropping acceleration. The Agera R model broke the world record accelerating to 300 km/h in 14.53 seconds. At the same trial, it also set a Guinness World Record in the 0-300-0 category at 21.19 seconds. With the Agera penciled in as the speediest car in the world, Koenigsegg engineers had one question: How to make it even faster?

Continuing the improve the Agera, Koenigsegg unveiled the Agera RS model. Hitting the production lines in 2015, the RS broke many of the R’s existing records. With the RS, Koenigsegg gave the Agera better airflow, increased power, and an increased RPM limit. Overall, the Agera RS was a truly revolutionary car. Still lightweight and road legal, the Agera RS could run on regular petrol and produce an astonishing 1160 horsepower. It all came with practical features too, like a luggage compartment.

Come June of 2015, the Agera RS was ready to hit the track. It blew past the Agera R’s 0-300-0 record, clocking in at under 18 seconds. This came out to an improvement of 3.24 seconds. It also boasted a strong improvement in the 0-300 km/h category, posting a time of 11.92 seconds, another new record. A few months later the Agera RS set more records in Nevada. Most notable among them was an average top speed of 447 km/h, a new record for a production car.

Providing the needed power for the Agera RS’ records was the technology Koenigsegg developed with its One:1 project. Limited to only six retail examples, the One:1 was a change for Koenigsegg to maximize its technology. Branded as the world’s first mega car, it got its name for its 1:1 horsepower to curb weight ratio. It was the first production car to achieve this feat and reach a 1-megawatt power output. This Koenigsegg was developed with on-track performance specifically in mind.

The latest Koenigsegg to set world records is the Regera. Although the Regera emphasized luxury features for drivers, it still featured the latest Koenigsegg technology. It boasts nearly 1,500 combined horsepower, making it the most powerful in the world. In September 2019, it broke the Agera RS’ record for fastest 0-400-0 km/hr time. It beat the Agera’s time by 1.8 seconds, going from stop to 400 km/h and back to zero in 31.49 seconds.

To learn more about the world’s best production cars, come to Koenigsegg Boston. Our expert team can provide you with all the information you need about these outstanding vehicles. We are New England’s only authorized Koenigsegg dealership. Contact us to learn how you can register your interest and get behind the wheel of these exclusive super cars. Talk to our staff who can answer any questions you may have about Koenigsegg. Nobody knows these cars better than us. Now that you know the great capabilities of a Koenigsegg, experience it for yourself. Fill out the contact form on our website to begin the process today. 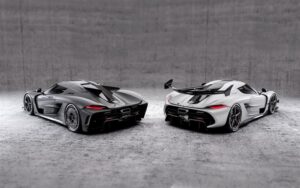 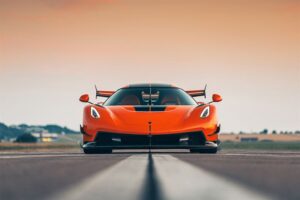